Welcome to Read with Royella! 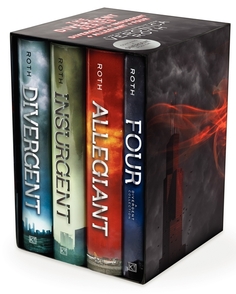 Books: Divergent, Insurgent, Allegiant and Four
Genre: Dystopian Fiction
With the movie release of insurgent just around the corner my book recommendation for the month would without a doubt have to be the divergent series/box set. As always sequels should be bigger and much exciting and insurgent is no exception. In addition to the bigger and darker sequel, the film also introduces the British-Australian actress Naomi Watts who will play the role of Evelyn, Four's mother who was thought to be dead in the first movie. As it turns out, Evelyn is the leader of the factionless zone, where a rebellion is being planned against the whole system.

Book Recommendation for the month of : April
Eleanor and Park by Rainbow Rowell 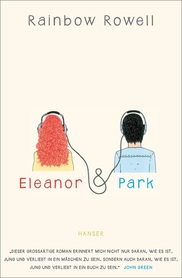 Genre: Young Adult Contemporary
Pages: 325
"Bono met his wife in high school, Park says.
So did Jerry Lee Lewis, Eleanor answers.
I'm not kidding, he says.
You should be, she says, we're 16.
What about Romeo and Juliet? Shallow, confused, then dead.
I love you, Park says.
Wherefore art thou, Eleanor answers.
I'm not kidding, he says.
You should be. "
Set over the course of one school year in the 1980's, this is the story of two star-crossed misfits - who are smart enough to know that first love almost never lasts but are ready to try and give just about anything to make it. When Eleanor meets Park, you'll get nostalgic and remember your own first love - and just how hard it pulled you under.

Book Recommendation for the month of : June
The Last Oracle by Emily Wibberley 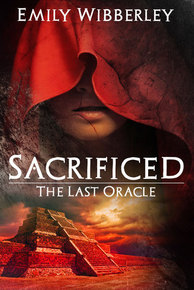 Genre: Young Adult Romance, Adventure.
Pages: 307
With the Release of FORSWORN happening next month, my book recommendation for this month is "The Last Oracle". The book follows Fifteen-year old Clio, who is the youngest of four sisters and happens to serve the merciless Oracle which she wants nothing to do with until her family is murdered by Mannix, the kings adviser and she inherits the Oracles power, a power she never wanted and doesn't understand.
With her life next in line Clio flees from her home in Sheehan and seeks refuge in a city where Oracles are forbidden and if found Clio would be sacrificed atop its grand pyramid! Running out of time and options Clio has no choice but to win he trust of Riece, an enemy warrior. Clio trys to hide her budding powers but the visions of Mannix and his barbarian army slaughtering her people torture her conscience. She alone has the powers to stop him but only if she can embrace her destiny and sacrifice everything. 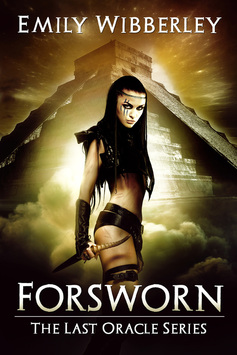 Oh My Freaking Word! How much more intense can this cover yet? I was such a huge fan of the previous cover and now this one just.. wow I really have no words to describe it. Been so excited for the cover reveal you guys and now its finally here in all its glory! For those of you who aren't aware about this series I do have a synopsis about it just above this blog post. Moving on, cause yes I know your super excited to get to the excerpt so lets get along with the synopsis before jumping there!

Synopsis:
Clio can see the future, but what she doesn't know about her past could destroy her. It’s been a year since Clio made her sacrifice to the Deities and embraced her destiny as the Oracle to save her people. The only family she has left is a brother who wants her dead. The prince, her oldest friend, is a king with his own agenda. And the man who once loved her, now hates her. All she can do is try to forget about Riece, the enemy commander whose heart she broke to save his life, as she serves the Deities. Her days are filled with Visions and bloodshed in a never-ending war against the Untouched. To add to her problems, she must pose as King Derik’s mistress to conceal her forbidden powers from the Emperor’s spies.When Riece unexpectedly returns to Sheehan with a new and beautiful ally, Clio knows she must put him out of her mind once and for all, but first, they are thrust together into battle against a mysterious Untouched warrior with otherworldly power. To reclaim her city, she must team up with the man she hurt, the man she still loves but can never be with, and finally confront the questions about her origin—questions with answers that Clio may not be prepared to face.


Excerpt:
The hallways had never felt so small before, never so stifling. Clio could hardly catch her breath as she sped down the corridors toward Riece’s old chambers. She needed to find out what the symbol meant. She had no choice but to go to Riece. She would just have to keep her feelings out of it. Before she could argue herself out of her thin conclusions, she found herself standing at Riece’s door. She knocked once, quietly, almost hoping Riece wouldn’t hear, wouldn’t invite her in.

“Come in,” he said almost distractedly from within.
She stepped inside and found him seated on a small bench, sharpening the edge of a small dagger. His cloak lay folded at his side, and his chest was left bare except for the smudged lines of his warrior ink. Happily, there was no sign that the princess was around. Perhaps Clio had imagined everything between them.
“Of course. It’s you,” Riece said without glancing at her. “You changed your hair.” He put aside his dagger and looked up at her. “Black. It seems like every time I see you, it’s a different color. Fitting, I suppose. Goes with your capricious nature.”
“Capricious? That’s a pretty big word for you, Commander. You sure you know what it means?”

He laughed bitterly, and for some reason Clio felt the familiar itch in her skin that could only ever be soothed with a fight.
He was suddenly serious. “It means ever-changing. Isn’t that why you haven’t wed the king? Has he, too, grown tired of your fickle heart?” His eyes mirrored the hate in his tone.
He had never looked at her with such antipathy before, and Clio’s blood flooded her cheeks. “Of course not,” she snapped.
“No?” He rose and advanced toward her. “Then you’ve some other reason?”
He was far too close, and Clio was having trouble thinking straight.
“We’ve been at war, hardly the time for nuptials. And—” she stammered.


This close, she could tell that Riece was much larger than he had been a year ago. The muscles in his shoulders shifted and bulged with the slightest movement of his neck.


“And?” he prompted.
“And someone had to defend this city after you took your army, to what? Rescue some princess?” She spat the words at him.
Riece’s eyes sparkled with silent laughter. “So that’s the reason for this delightful visit. You’re jealous. Well, you have no right to be.”
“I’m not jealous,” Clio protested.
“No? Because my remembering of this,” he gestured to the two of them, “was that you used me so you could get back to your beloved king. You made your true feelings perfectly clear.” His look had darkened, and his jaw tightened with restrained fury.
She would have preferred a slap to the way he was looking at her. “You’re right,” she admitted.
Riece’s gaze bored into her, but what he looked to find, she couldn’t say.
“Why are you really here, Clio?” he finally sighed, exasperated.
To tell you that I’ve dreamt about you every night for a year, she wanted to scream. “I need you to look at something.”
“Ordering me around so soon?” His lips quirked up in a grin that didn’t travel to his eyes.

(Following are the Purchase links for Book One in the Series: ) 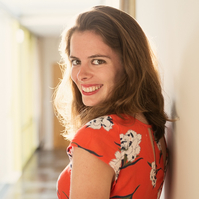 Emily Wibberley grew up in the South Bay where she spent her formative years battling zombies on her Xbox, watching Buffy the Vampire Slayer, and voraciously reading everything from The Hunger Games to Jane Austen, where her love for feisty young heroines was born.


When she isn't reading the latest YA book, she enjoys watching kick-butt action movies with her two rescue German Shepherds, Hudson and Bishop, named after characters from James Cameron's Aliens.